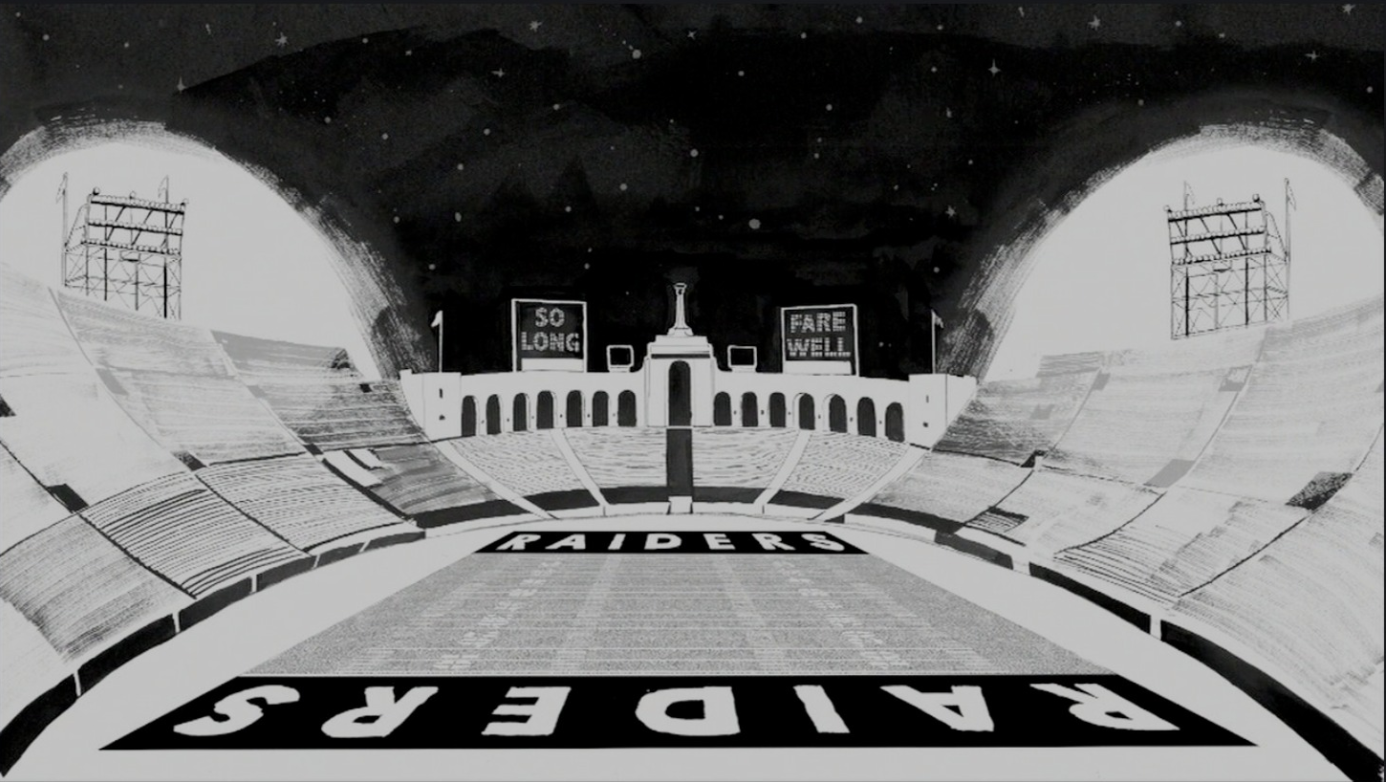 After being dormant for 22 years, the NFL returned to Los Angeles in 2016, with the Rams moving back from St. Louis, followed by the Chargers from San Diego in 2017. The problem? For most Angelenos, neither team is their Los Angeles football team. For many it will forever be the Raiders.

Back in 2009, ESPN began its “30 for 30” series, marking the 30th anniversary of the network by documenting 30 stories from sports that happened while they were on air. L.A. native, rapper and media mogul  Ice Cube directed the 14th “30 for 30” film “Straight Outta L.A.” in 2010, recounting the Raiders’ time and influence in Los Angeles from 1982 to 1994. He explored the city’s perpetual association with the franchise, and the cultural connection between the Raiders’ brand and hip hop.

The film begins by introducing Raiders’ owner and general manager Al Davis and highlighting the Raiders’ rise to prominence in the league, before Ice Cube sets the scene of  his teenager-self living through the Reagan era in South Central L.A. The rapper outlines the reasons  why the team moved with the self-dubbed “maverick” and longtime outspoken Davis, with the help of reactions from former players like Marcus Allen and Howie Long.

Ice Cube decided to lay out the film chronologically, while intermittently weaving in  history, which provided the much-needed context to help set the tone of the times. Moreover, the scene setters allowed the film to seamlessly transition between the Raiders fandom to the rapper’s personal rise through the ranks during the team’s tenure in L.A., and back again.

The rapper’s own narrative is colored with animated clips that keep the audience engaged and ready to connect with the person behind all the success. For example, much is said about Ice Cube’s education, like the fact that his own academic ambitions led him to  attend Taft High School in the San Fernando Valley, a well regarded LAUSD academic school.

All around the same time, the film shows Al Davis winning an antitrust lawsuit against the NFL, one that led the Raiders to move south to the City of Angels in 1982.

Upon arrival, the Raiders were shown being met by a city that at the time was going through a cultural transition, one that included thousands of Mexican and Central American immigrants looking to make Los Angeles their home. And the team’s residence in the Coliseum and reputation were at the center of it all.  The franchise’s history of breaking down racial and social barriers in the NFL had long signaled to minority and white middle class communities that the Raiders were a team for them.

In just 52 minutes, the documentary masterfully covers the intersection between sports and the social conditions of a diverse community. And is only helped by the music. The melodies help lay out a stark contrast between the NFL establishment and a largely white 80s mainstream culture, not to mention the voice of Black youth through hip hop.

But the feel-good narrative in and of itself is what really delivers. The Raiders are shown lifting the spirits of L.A. by winning the Super Bowl, the city’s first and only Lombardi Trophy, in their first season. With it they joined the 80s LA sports renaissance of the Fernandomania Dodgers, Showtime Lakers, and 1984 Olympics.

That said, the film doesn’t shy away from difficult issues like the crack epidemic in South Central and the development of Gangster rap, a genre that touches on the violence many urban communities were experiencing and the financial disillusionment with the Reagan era. More specifically, the film explores the development of Ice Cube’s hip hop group  N.W.A. Ice-T and Chuck D, tout the development of the genre and group, as well as the association between hip hop and Raiders branding. They point to apparel N.W.A and others in hip hop were drawn to at the time: the Raiders style, colors, swagger, which played to their own authentic hard realities.

So if you’re looking for a documentary that accurately reflects the impact of the Raiders on Los Angeles and the culture at the time, this film is your film. In less than an hour, you’ll get a sense of what growing up in 1980s metro Los Angeles was really like. You’ll learn about the enduring power of brands, as well as their associations with individuals, communities, identity and so much more.

In February, ESPN released another “30 for 30” film “Al Davis vs. The NFL” on the legal feud between Raiders owner Al Davis and the NFL.

I am a content and social media manager and also have experience with sports events. I enjoy writing about the intersection between sports and finance. I also love the Dodgers, Lakers, Rams and just about every team from my hometown of Los Angeles. You can follow me on Instagram at @palch_potato.