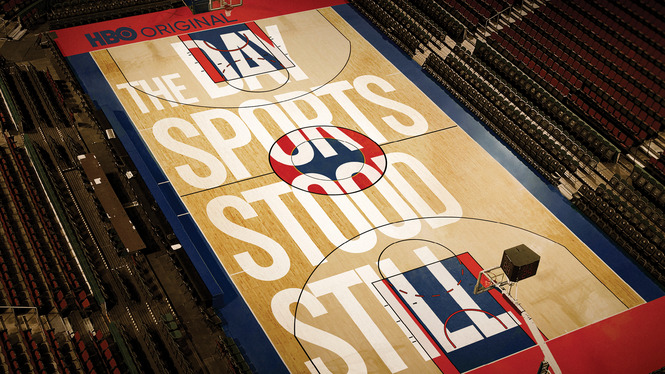 For sports, the seriousness of the emerging pandemic started coming into focus when Chris Paul, his teammates and opponents walked off the court in Oklahoma City on March 11, 2020.

And that’s exactly where HBO’s newest documentary “The Day Sports Stood Still” begins. It captures the outset of the pandemic, the ebbs and flows that followed and the movement for social justice that shook the country. Of course, all through the lens of professional sports.

Directed by Antoine Fuqua, known for “Training Day” and “What’s My Name: Muhammad Ali” amongst others, the film is undoubtedly a strong chronological narrative of the past tumultuous year.

To open, the documentary highlights some of the most recognizable and exciting sports moments in history including Secretariat at the Kentucky Derby, Barry Bonds passing Hank Aaron, Tiger Woods winning, Serena Williams winning, and an Ali Frazier fight, among others. All of which leave the viewer with a feeling of loss and reminded of the joy sports can bring people.

Moreover, all throughout, Fuqua goes beyond the NBA with news stories, commentary and home videos from a range of popular sports, making it a more inclusive take on history. It covers the suspension of March Madness, The Masters, and the Tour De France. Not to mention the nail in the coffin: the postponement of the 2020 Olympics in Tokyo.

But more importantly, the film shows the aftermath of all these headlines, making some of the biggest world class athletes more relatable. Fuqua highlights what many of them did with all their new found free time and the workarounds they developed to continue training. Furthermore, he includes first-hand accounts from players who tested positive for COVID-19 and were forced to isolate, showing how sports are a microcosm of society at large. The touching stories of more free time with family and the loss of family from the virus humanizes the athletes and helps the viewer empathize with them.

While showcasing a variety of athletes, Fuqua does focus on Chris Paul’s personal experience in the NBA and his fight for racial justice throughout 2020. As the president of the NBA Players Association, a loving father and a player in the first game canceled due to COVID-19, Paul offers a unique perspective on the turbulent 2020 sports year. He discusses why the activism for Black lives that took over the summer of 2020 is important to him and how he’s involved in advancing social justice issues as the president of the NBA player union.

The film covers everything from the day George Floyd is killed while in Minneapolis police custody, the nationwide outrage that ensued and all the protests that followed. It helps viewers understand why the fight for racial justice is personal for the NBA, an organization made up of more than 70 percent Black athletes.

NBA players reflect on their own past and continued experiences with racism, signifying that no matter where you stand on the social ladder, this reality cannot be escaped. In some instances, players acknowledge that their star status might be the only reason some of their experiences did not end in the worst of ways, noting that this is not the reality for most Black men.

Now despite how definite the return of sports seemed in 2020, Fuqua does a great job at showing all the health risks that were considered, the safety protocols that were implemented and the desire from players to continue speaking out against racial injustice. It follows the outset of the NBA bubble, the shooting of Jacob Blake by police and the Milwaukee Bucks’ refusal to play their scheduled game on August 23rd in protest against police brutality. A move that was later echoed throughout NBA circles and the MLB, MLS, NHL, WNBA, in addition to some NFL practices.

All things considered, “The Day Sports Stood Still” captures the unprecedented, difficult year 2020 was for sports, but also reminds viewers that “sports can create hope where once there was only despair,” as the great Nelson Mandela quote so eloquently states at the beginning of the film. A win for HBO.

I am a content and social media manager and also have experience with sports events. I enjoy writing about the intersection between sports and finance. I also love the Dodgers, Lakers, Rams and just about every team from my hometown of Los Angeles. You can follow me on Instagram at @palch_potato.